In September/October Deeper Walk International brought an interesting series of webinars on the topic of “Why Western Christianity Failed.” The speaker was Dr. Jim Wilder from Shepherd’s House in California.

In this post I will give a summary of part three:

The theme of part three is the false dichotomy in Western Christianity that resulted from the Voluntarist philosophy (part 1) and the medieval psychology (part 2). Christianity became a matter of giving people the right information so they can make the right choice, but this did not help to change people’s character.

As a result Western Christianity paid a lot of attention to belief errors, for example, in cults (e.g. Jim Jones) or in other theologies (liberation theology) but did very little about character failures, for example, when church leaders run off with somebody else’s wife, addictions, divorce among Christians, pedophile priests, pornography and many other character failures among Christians. 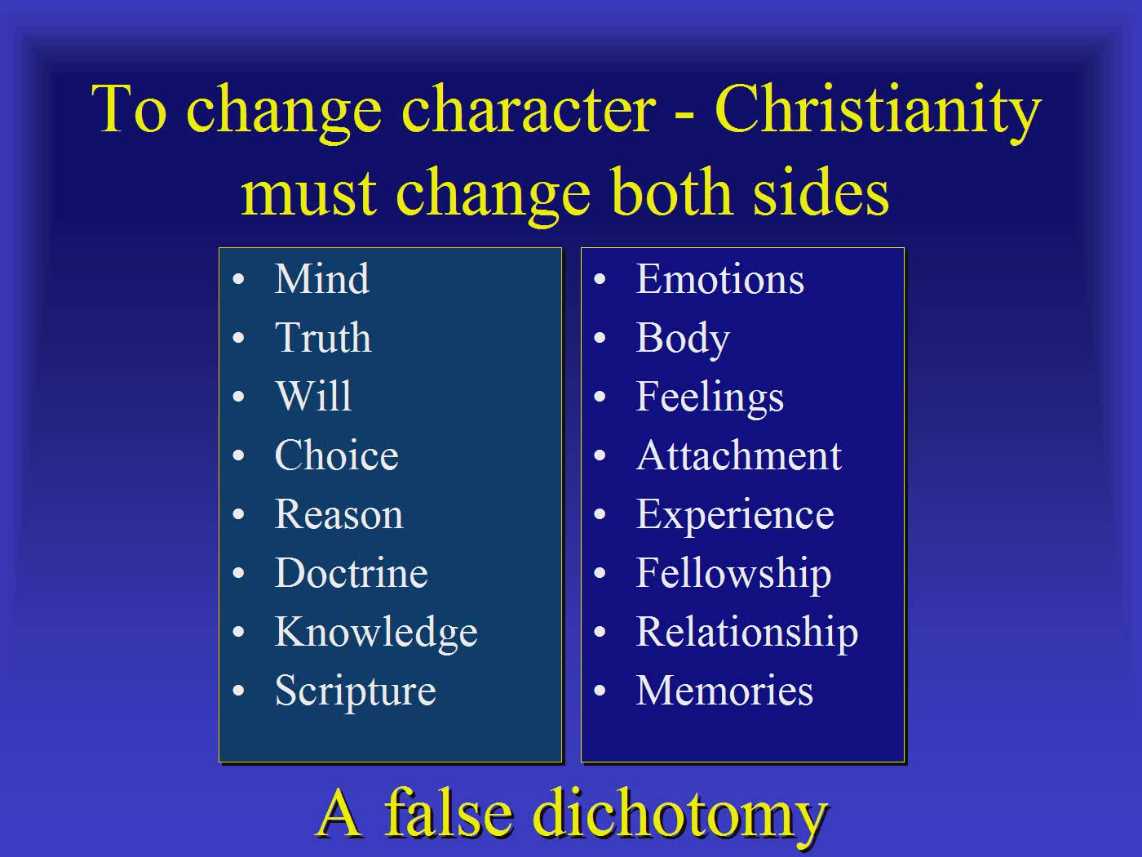 It is not a matter of picking one or the other. Christianity needs to change both sides.

One result of this false dichotomy is legalism.

It easily develops when you think that ideas and choices are the key to being a ‘good’ Christian.

What is needed to change this?

We need to understand how our brain works. The control center of our life is situated in the right hemispheres of the brain – not the left thinking side of the brain! It is this right side that takes over when we are under stress or in trouble. Therefore it is the right side that needs to become Christian to influence our whole life, including our character.

How is the control center trained?

The right brain can learn to stay true to ourselves and our God-given identity under pressure:

Our character can be changed

All of this has to happen in the situation itself, when we are under pressure, when we experience suffering or temptation, not when we are sitting in church and are not tempted.

The left hemisphere can help in this process,

Memorizing Bible verses alone does not help to do the right things, but when we live in relationship with the person that is behind them.

We are often trying to use the left hemisphere to compensate for the lack of emotional skills but that does not help.

Unfortunately but not surprisingly, a lot of these can be found in Western Christianity.

Many people who think their way through relationships are very legalistic, rely heavily on predicting the behaviors of others, box people in, expect them to behave according to roles (“you are … you should do …”), enforce compliance to their expectations, and look for explanations when things don’t go according to expectations.

This leads to “left-sided sins problems”

They are typical among those who try to live their faith from the left-brain hemisphere:

Trust in the LORD with all your heart
and lean not on your own understanding;
in all your ways acknowledge him,
and he will make your paths straight. (NIV)

Trust GOD from the bottom of your heart;
don’t try to figure out everything on your own.
Listen for GOD’s voice in everything you do, everywhere you go;
he’s the one who will keep you on track. (The Message)