This is one of my favorite memories from my time in CAR (Central African Republic). I wrote it for Pictures, Poetry & Prose when the theme was “Sharing a meal”. I forgot to check back and discovered only now that my contribution had been chosen, and I received the “Exceptional Writing Reward.” My first blogging reward! 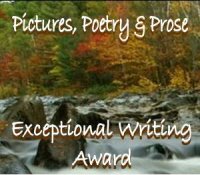 1994: Our team of sociolinguistic surveyors arrived in a remote village planning to do a group interview on language use. We were told that the men were all out in the field drinking palm wine. So we had to wait for the next day. In the late afternoon the other female team member and I got the crazy idea to cook a local dish – Gozo (manioc/cassava fufu). Our guide organized all the necessities – Manioc flour, stones for a stove, fire wood, sieve, cooking pot, large wooden spoon. We did not need to pound the flour, but we nearly forgot to sieve it. We had quite a few spectators – two white women cooking on an open fire? Most village women had never seen a white person before. Can white women cook? They did not think so. When the Fufu was nearly ready, we decided to open two tins of lentil soup to accompany it, instead of a local sauce that would have taken a lot more time. Suddenly we had the even crazier idea to ask the village chief (who was present and not drinking palm wine) to eat with us. In an African context a very normal thing and matter of politeness and hospitality – except when you are not even sure how your meal will turn out. To our own surprise he accepted. So our team, our guide and the village chief sat down together and ate as is normal there – from one big bowl with our hands. It tasted quite good but the lentil soup must have been unusual for the village chief.

The next day in the morning we were finally ready to start our group interview. The village chief gave a moving introduction speech concluding it with the words: “Formerly white people came and treated us like monkeys. Today another type of white people has come. They are white people with whom we can put our hands in the same bowl (which is an important sign of friendship).” We were all deeply touched.

4 thoughts on “Sharing a meal”